The Peacock Revolution and the Beatles: British Men's Fashion from 1963-1973

Menswear before the Peacock Revolution

The picture on the right side of this page depicts men's fashion as it was: tailored, conservative, with plain neutral colors and no patterns.  This picture was taken in 1963, prior to the arrival of the Beatles in America.  Their sense of style evolved with the changing social times in Great Britain, and became more flamboyant and colorful. Men started to feel more confident and comfortable in their sexuality when prominent public figures wore things that were once considered taboo for any heterosexual male to wear.  Certain colors on men were deemed unwearable unless you wanted trouble of some kind.

The pictures in the gallery below are representative of pre-peacock menswear.  On the next page, you will learn a little bit about the history of the Beatles: who they are, where they came from, and why they were significant.

Men's Styles Prior to the Peacock Revolution 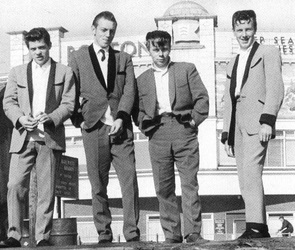